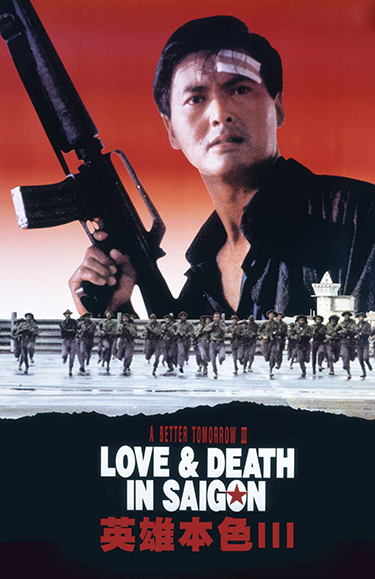 Director Tsui Hark takes the reigns from John Woo in a prequel to the much revered film series with A Better Tomorrow III.

Set during the Vietnam War, Mark (Chow Yun Fat) travels to Saigon to join his cousin Mun (Tony Leung Ka Fai), just as he gets out of jail. Using a contact in the Vietnamese army, the two soon start trafficking black market weapons with a beautiful female assassin named Kit (Anita Mui).

After a deal goes horribly wrong, they all flee to Hong Kong where Kit’s feelings for Mark grow. However, Mark is aware of Mun’s strong feelings for Kit, leaving the three in a complicated love triangle. Making matters worse is the return of Kit’s former lover Ho, a crime boss who doesn’t take too kindly to Mark and Mun’s advances on Kit. After attempting to the kill the two cousins, a new war begins between Mark, Mun, and their new adversary, Ho.