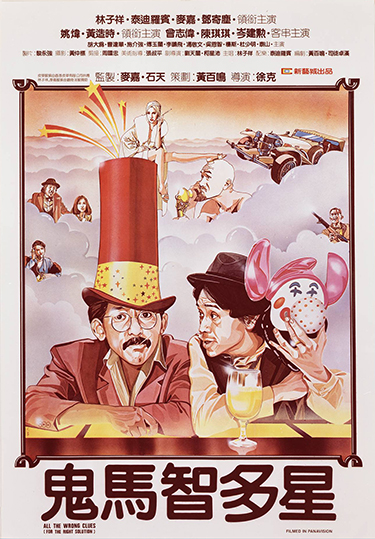 All the Wrong Clues

Combining an all-star cast in a majestic setting, All the Wrong Clues marks Tsui Hark's very first box office hit. Winning 'Best Director' at the Golden Horse Film Festival, the film set him on the path to becoming one of Hong Kong's most influential filmmakers.

Upon his release from jail, Godfather Capone (Karl Maka), is determined to have his revenge on Champ (George Lam), a mild-mannered, small time private eye who was responsible for Capone's incarceration. Capone sends the eccentric killer Popeye (Eric Tsang) after Champ, but he has an ally in Police Chief Robin (Teddy Robin), who decides to protect Champ from Capone's encroaching henchmen by taking him into custody.

However when Capone's rival Old Woo, a crime boss from Shanghai, bails Champ out of jail in order to use him as bait against Capone, the Police Chief must make an extremely risky move and bring together the heads of the 'Four Families' to try and prevent a bloody massacre.