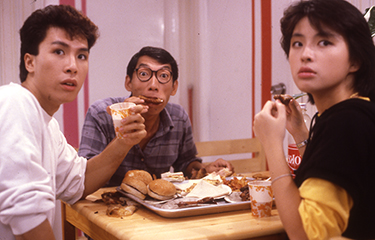 Eddie (Donnie Yen Chi-dan) is very fond of dancing and seeks every opportunity to improve his craft. He is so eager to learn from a retired Cantonese Opera master, Tayn (Yuen Wo Ping) that he persuades his elder sister (Wong Wan Sze) to give the coach a job.

Jacky (Kenny Perez), the champion dancer from the States is having a great time in Hong Kong until he meets Eddie and Kitty (Anna Ueyama). Eddie's classmate David (mandy Chan) and Jacky intend to show off but have to admit defeat in a tennis match. Kitty's bodyguard, Ms. Biggy (Shirley Tan) admires Jacky who is attracted by Kitty.

Tayn and Eddie make fun of Ms. Biggy in the gymnasium. But the scene provokes super boxer, Power (David Dik) to challenge Eddie.

At Jacky’s birthday party, he finds himself the victim of the conspiracy against Eddie. Despite beating Jacky in the dance contest, Eddie feels miserable for being torn between Kitty and his cousin Stella (May Law).

Eddie has to fight Power because Stella is being held as hostage. Despite his physical built, Eddie defeats Power by dancing and delivering punches to the upheat music.Eddie and the hospitalized Tayn finally win the hearts of their beloved ones.

Back to Donnie YenBack to Yuen Woo PingBack to M~O