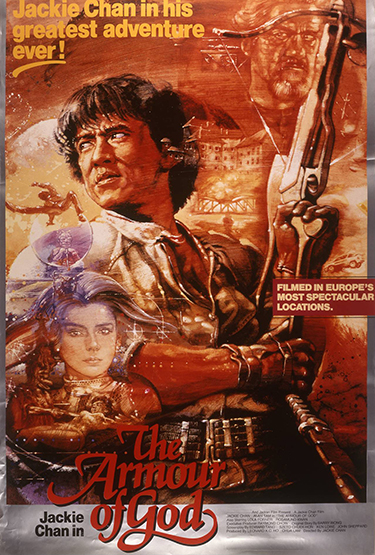 Slapstick and martial arts titan Jackie Chan stars in this globe spanning thrill ride, which firmly established his reputation as the master of the action-comedy.

In this epic film, Chan portrays Jackie aka "The Asian Hawk", an ex-singer caught up in an extraordinary adventure. When his ex-girlfriend Laura (Rosamund Kwan) is kidnapped, he is forced to help track down the mysterious and legendary Armour of God. Aided by Laura’s fiancé Alan (Alan Tam) and May (Maria Dolores Forner), the daughter of a wealthy artifact collector, Jackie’s breathtaking quest leads him into danger all across Europe, where he is forced into the ultimate confrontation against a cult of drug-running terrorists disguising themselves as monks.