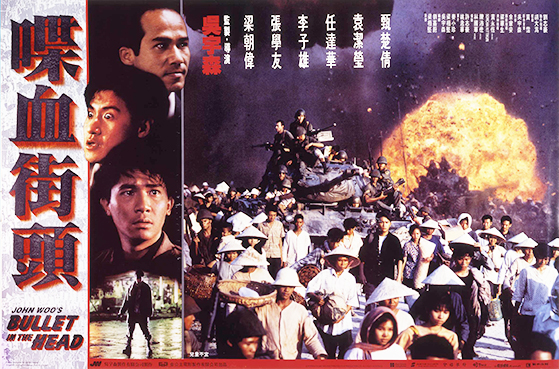 Bullet in the Head

Set in 1967, during the Vietnam War, Bullet in the Head follows the story of Ben (Tony Leung), Frank (Jacky Cheung), and Paul (Waise Lee), three friends all defiantly proud and with an unwavering loyalty to their families and each other.

After Frank is accosted by a local gang on Ben's wedding day, the trio set off to administer their own brand of justice, resulting in the death of a gang member. Trying to evade capture from police, the three friends flee for Saigon, where they begin to run black market supplies with the aid of mercenary, Luke (Simon Yam).

However, they soon find themselves embroiled in the political turmoil of the Vietnam War, ultimately testing their friendship and loyalty to each other.